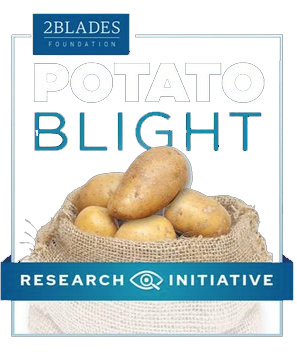 Five generations ago, my family sought refuge in this country, fleeing a Great Famine that killed more than a million people.

The trigger for the famine was a water mold that caused a disease called late blight, which turned the potato leaves brown and rotted the tubers in the fields. This pathogen destroyed the potato crop again and again for over five years, shattering families and forcing another million souls to risk their lives sailing on “coffin ships” coming to America, Canada, and Australia.

We’re proud of what the Kennedys have accomplished since we arrived in the United States, but we will never forget the suffering of the Irish people in the 1840s and beyond. That is why I’m proud to be involved with the 2Blades Foundation’s efforts to fight the rising risks of famine in East Africa, and I’m reaching out to you for your support.

Today, the potato is a staple food for millions of people in developing nations—the third-most important food crop in the world. Historically, the Irish poor depended on the potato for sustenance, and the famine stole not just their food and incomes, but also their futures.

Today, people in East Africa have more than tripled their production of potatoes in the past twenty years because they grow quickly and are a good source of energy. And yet, potato late blight now threatens African farmers’ harvests and their families in the same way that it menaced our own, destroying up to 70% of a crop in a single season. These crop losses mean greater hunger and poverty for many.

Growers in wealthy countries can protect their potatoes by spraying expensive chemical fungicides, but African farmers don’t have that luxury.

The 2Blades Foundation is working with the International Potato Center’s research facility in Kenya to develop a new local potato variety that resists this disease without the use of chemicals. They’ve tested the new potato for five years, and it is completely resistant to late blight, requiring no fungicides. This will triple farmers’ yields and increase their families’ incomes by up to 40 percent.

I’m chairing the Foundation’s campaign to raise the funds needed to bring this new potato variety to market, and we need your support.

The 2Blades Foundation is a non-profit science organization which delivers genetic crop disease solutions, with a special focus on smallholder farmers in the developing world. Our common goal is to help smallholder farmers in East Africa protect their harvests and gain greater food security, while using less land, water, and chemicals.

With your help, we can prevent this plant disease—which caused so much suffering among our own families—from doing further harm. Your tax deductible contribution will go a long way in making a difference in the lives of millions of people, and your help will build a world that is more prosperous, secure, and just.

Thank you so much for your help.